Far from promoting democracy, in their recent Facebook posts the UEC seems to be using the rules and regulations, and the fear of punishment, to prevent free and open political debate. Their obsession with the ‘No Vote’ campaign, and specifically their mistaken belief that the campaign is breaking the law, risks closing down the open public debate that should precede a democratic election. 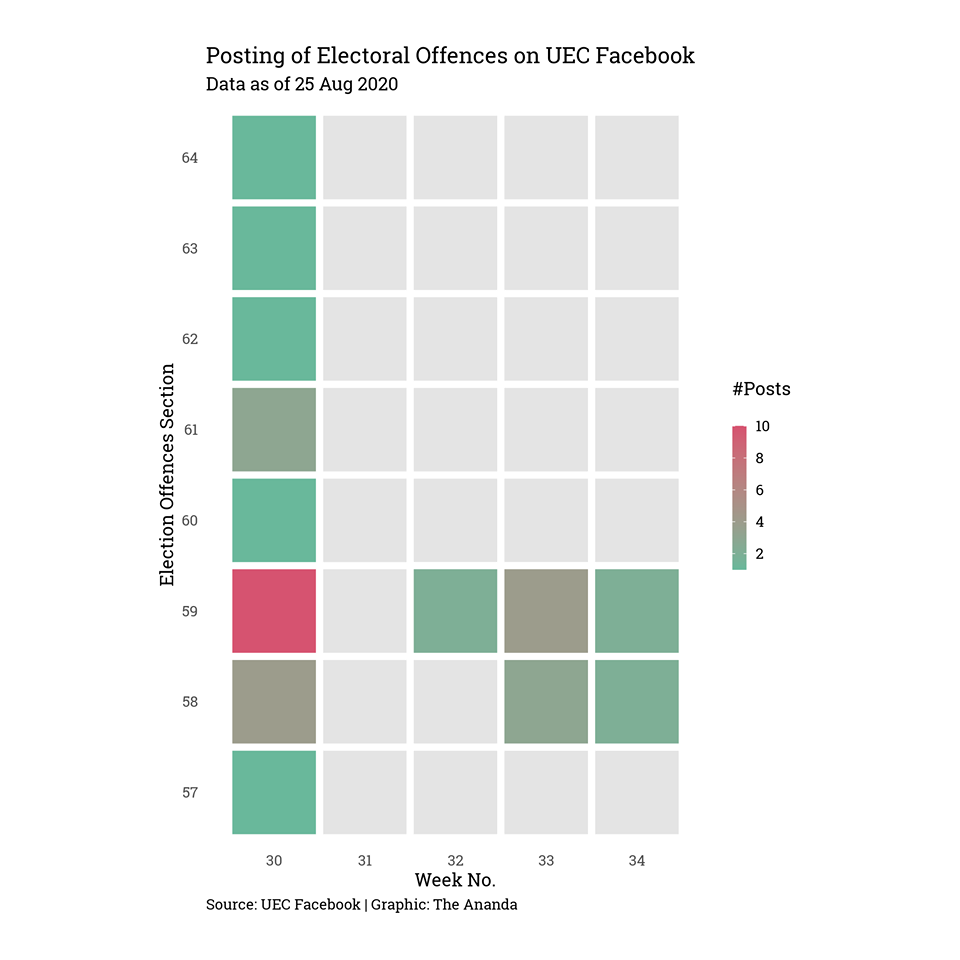 Between 23rd July and 24th August, the UEC has posted copy-paste excerpts from the Union Election Law a total of 35 times. The clauses they have chosen to share specifically deal with prohibitions and penalties relating to electoral offences such as the use of violence, threats, undue influence, cheating, taking or giving of bribes to prevent a person from exercising their right to vote.

You can see two such examples below:

In particular, they have posted Clause 58(d) a total of 6 times. This deals with the penalties for ‘giving speeches at meetings, instigation, writing, distributing or using posters or attempting by other means to disrupt the voting or election’. It is likely their focus on this provision is guided by their recent obsession with the ‘No Vote’ campaign. However, it would require a particularly loose interpretation of the law.

As we have mentioned in previous articles, we do not agree with the UEC that it is unlawful to discourage people from voting. Indeed, the ‘right to abstain’ is protected in the law, and the articles of the law the UEC keeps citing are there to deal with directly intimidating or threatening behaviour to discourage voters, not to prevent a vigorous public debate on whether or not you should vote.

We do not encourage ‘no vote’ – we think you should make your choice on 8th November – but we also defend the rights of any individual or group to share their political views and stimulate debate. Far from threatening people with police action, political parties, including the ruling party, should instead be seeking to convince people to vote with their plan for what they will do if they win power. In this way, voters can enjoy their political freedom to freely debate opposing ideas, and make an informed choice: the essence of democracy.

Yet in contrast to all their posts about electoral offences and punishments, the UEC have only posted around 11 times with positive messages encouraging people to get out and vote. Three of these posts were songs about voting, and the rest were posts about how to check the voter lists.

The first question we have is whether the UEC truly believes that posting copy-paste clauses from the Election Laws is an effective means for raising awareness amongst the public about electoral offences. Given laws in Myanmar are often worded in a technical or vague way, surely some effort to clarify the terminology and translate the laws into plain, accessible language would be more appropriate.

Secondly, and more importantly, given that the UEC seems so outraged by the ‘No Vote’ campaign and wants to encourage people to get out and vote in November; do they really think that bombarding Facebook users with the rules, regulations and penalties is the best way to encourage democratic debate?

Many people have fought long and hard for the right to vote in Myanmar. The UEC and all state institutions should be rejoicing in the opportunity people now have to freely discuss and debate political ideas ahead of the November poll. But instead, by frightening people with information about potential fines or imprisonment, they are sending out the opposite message.

Daw Aung San Suu Kyi once discussed in Hluttaw as a lower house MP in 2013: "The Bill Committee just mentioned that we need punishments in early times of democracy. I see the opposite. In early times of democracy, we need the laws that protect the people for the prevalence of rule of law. We need to raise the awareness of the people that the laws are not to punish them."

You can check the full transcript here: